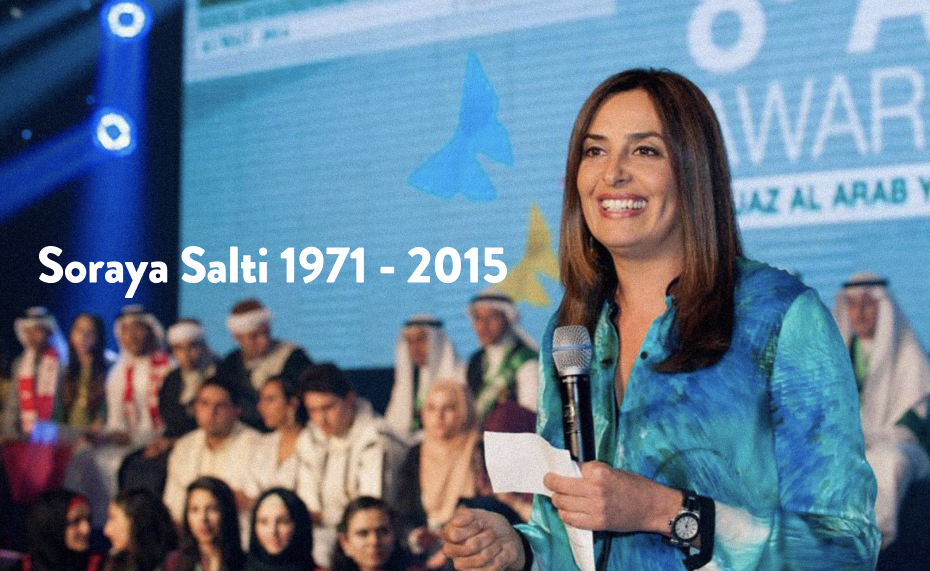 Soraya Salti devoted her life to creating entrepreneurship education programs that that make it possible for over two million youth in her beloved Middle East to become the architects of their own lives.

Soraya was the winner of the Schwab Social Entrepreneur of the Year Award, the first Arab woman to win the Skoll Award for Social Entrepreneurship, was named a Young Global Leader of the World Economic Forum, won the Henry Kravis Prize in Nonprofit Leadership, and was named one of the “100 Most Powerful ArabWomen” in Arabian Business magazine. Even former President Barack Obama honored her at the Presidential Summit on Entrepreneurship.

Amidst her positivity and passion for social change, there was another side of Soraya that people rarely saw.  Soraya was tired of having to start and restart negotiations as government turnover threatened the programs she had worked so hard to build.  She pushed herself personally twice as hard as anyone who worked for her because she wanted to set an example.  As CEO of Injaz, she was always on the road and it took a toll on her personal life, eventually leading to a divorce.  Her 11-year-old daughter Raya was taken care of by her aging parents, who helped as Soraya traveled throughout the Middle East, but it was becoming challenging for them to provide support as they themselves were facing health issues.  She was taking medication for depression to help cope with the stress, but like many social entrepreneurs living pay check to pay check without expansive healthcare benefits, it was not enough.

A farewell note with Soraya’s own handwriting was confirmed by her father. While many still can’t believe it, and attribute Soraya’s death to something more nefarious, it appears that this admired leader had no one to talk to and share safely the incredible stress she was dealing with. After her death in November 2015, the Dalai Lama who knew of Soraya’s work sent his personal doctor, Dr. Barry Michael Kerzin, an American physician and Buddhist monk to the 2016 Skoll World Forum to conduct a series of workshops on mindfulness.  Through these workshops, we discovered that many very accomplished change makers were dealing with a similar sense of isolation and personal health issues.

A conversation between the leadership of Skoll and Rodrigo Baggio, Jeroo Billimoria, Taddy Blecher and Willy Foote centered on how we yearn to share the stories of our lives and to have honest conversations with people we trust without fear of being judged.   We want to be open and vulnerable, but who can we rely on to have our best interests at heart and maintain our confidentiality? Where can we find this kind of depth, intimacy, and support in our lives?
By coincidence, three of the four founders of Tendrel, in their previous for-profit ventures benefited greatly from a peer-to-peer learning experience as members of the Young Presidents Organization (YPO).  Why didn’t this exist for them?  This spawned the idea of an oasis for change makers to flourish.

To honor the Dalai Lama the founders chose the name Tendrel – the Buddhist concept of "dependent arising" - the responsibility to our happiness lies within us.  In a world where the difficulties we face every day often feel overwhelming, Tendrel provides a safe space and a powerful path that connects our personal lives with the organizations we lead.  May the spirit of Soraya Salti live eternally within the global oasis we are building for change makers.  May her courage and determination inspire us to become a strong voice and advocate for the world’s change makers. Let us be the Oasis that nourishes those who change the world!